Christopher’s striking green eyes and handsome good looks didn't buy him happiness, but he learned to survive off of them to maintain his expensive lifestyle. Now, after he has nearly destroyed himself, he's in the fight for his life...

When Christopher Parker checks himself into the Watermeadow Rehabilitation Center, he was frightened for his future and what was to become of him. Haunted from his past, he knows that he has to take this step in his recovery or face his likely death as the alternative. He never expected to find his social worker, Jason Calhoun, incredibly attractive. Christopher dreams of finding a man to love and who will treat him with decency. Although Jason does fit the bill, he knows that this relationship is strictly professional. Completely out of reach for a failure like himself.

Jason, who is a hopeless romantic, is in the endless pursuit of Prince Charming. Always unlucky in love but finds solace in the care of his patients. He loves being needed and having patients that depend on him. Jason comes to realize that the guys he dates always need to be rescued, much like his patients. A strategy that he's learning is a poor choice.

Jason discovers that Christopher has become tangled up with a famed billionaire. As a billionaire, he can afford anything he wants, which seems to include even the ability to buy true love. Suddenly, he fears that everything he has worked so hard for, both romance and career, is being threatened by his new nemesis.

If you enjoy stories that pull you in and have you caring about the characters and what happens to them, then this is the book for you. It promises to have you laughing, crying, & smiling!

When demon Saul persuades comic book artist Tom to sign over his soul in exchange for a night of passion, little does he know what lies in store. Demons can’t fall in love—or so he’s been told—but he finds himself smitten and attempts to destroy the contract, desperate to save Tom from an eternity of torture.

With Saul and Tom forced to run, a showdown between Heaven and Hell ensues as the angels and demons argue over who owns Tom’s soul. But does either party have a stronger claim than Saul? 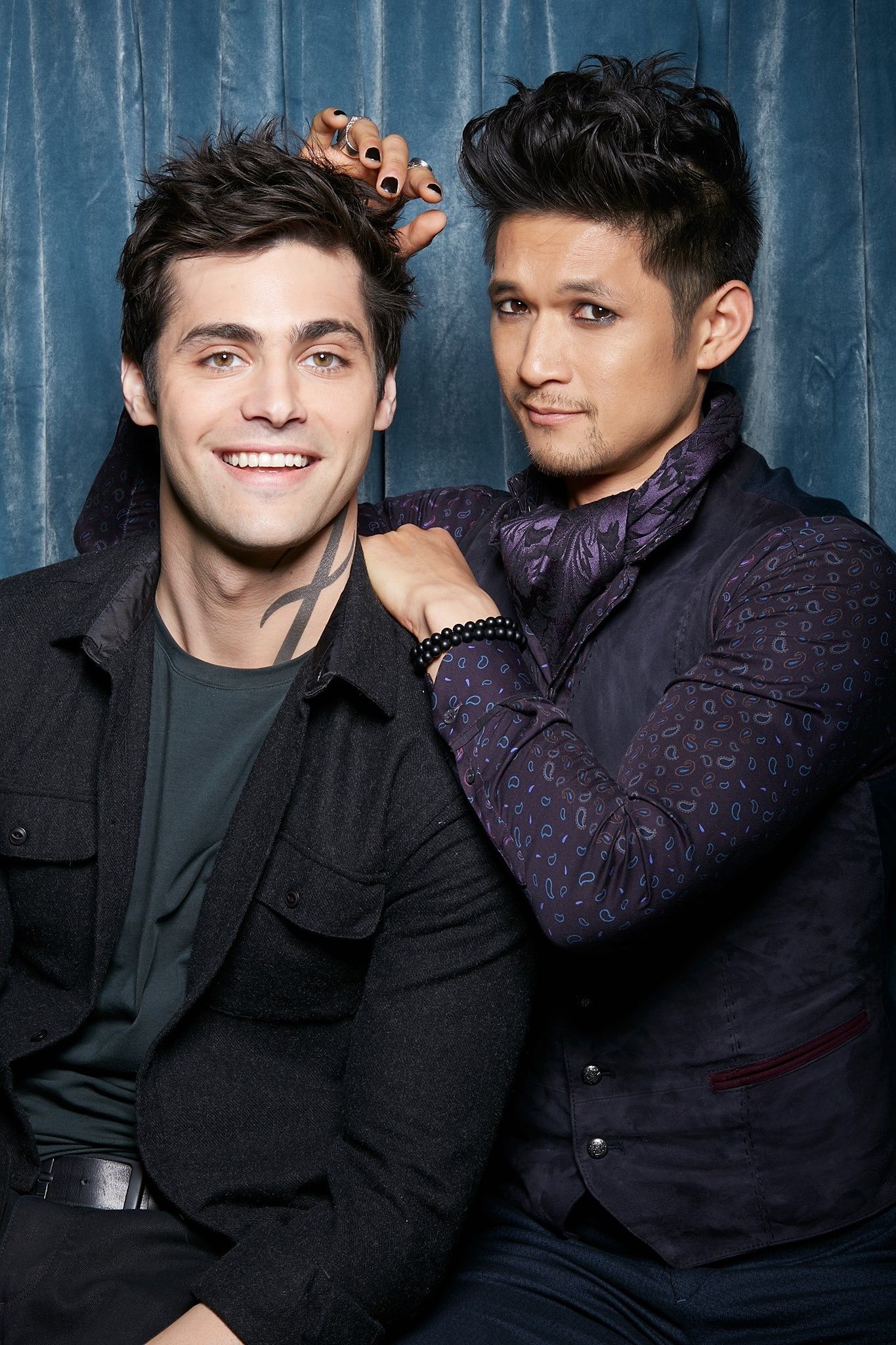 While relaxing on the couch one evening, Magnus and Alec talk about the future.

This is a lovely, fluffy and quick read that will give you the warm and fuzzies. Sometimes there's nothing better than seeing Magnus and Alec just being domestic and cute, and that's exactly what you get with this one-shot! Check it out!

Blog Tour: Leaning Into the Look by Lane Hayes

Grant Kostas made a career based on his looks before joining his family’s real estate firm. He may not love his job but he’s better at sales than he thought. And when he’s poised to bring in the biggest account of the company’s history, even his father is impressed. Unfortunately, the extra attention highlights Grant’s personal life. His parents accept that he’s gay. They just wish he’d meet a nice Greek man.

Miles Harrison is a fabulous red head going through a rough patch. Between getting dumped by his long-term boyfriend and finding a new place to live in the city, he’s nearing his wits end. He’s not sure why he thought rooming with his boss’s friend was a good idea. Miles has had a crush on Grant for years. However, he knows attractive people aren’t always pretty on the inside. As the two men grapple with external problems, they form an unexpected bond of friendship and trust that feels like the real thing. The only way to know for certain is to let go of fear and lean into the look.

Dr. Casper Rollins knows how to have fun. The love of his life, Kage Myers, lived every moment to the fullest before he died. Now, Casper goes skydiving, mountain-climbing or on other adrenaline-soaked adventures when he wants to feel closer to his lost love.

Medical director Eric Holtz is married to his work -- so much so his husband left him. But when his niece shows up, pregnant and in need of an ally, Eric suddenly has family again. Unfortunately, her obstetrician, Casper Rollins, is sexy enough to turn Eric into a blushing adolescent.

What begins as a game to break Eric of his workaholic tendencies escalates into scorching sex and feelings that can't be ignored. Casper never planned to give his heart to anyone other than Kage, and Eric won't accept anything less.

If these two want a future, they'll have to embrace the lesson Kage taught Casper long ago: You only live once. 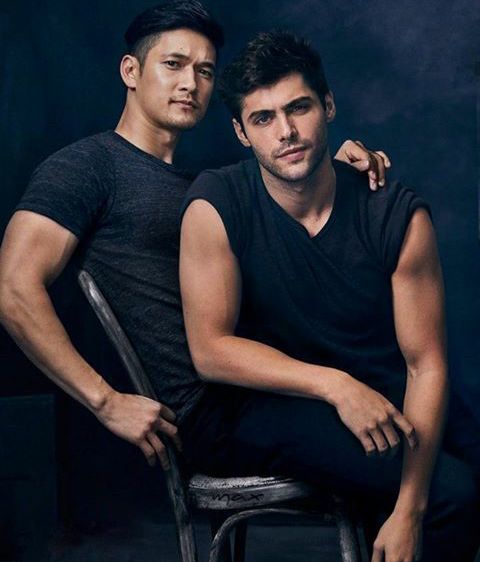 Magnus and Alec are dancers trying to make a living doing something they love. When Alec meets an enchanting dance instructor, he is immediately captivated. Although he loves spending time with Magnus, past hurts and scars always have a way of reappearing at the most inopportune times. Will Alec be able to push through those issues and live his best life with a wonderful man by his side?

This is a lovely story that I'm really enjoying. It's nice to see Magnus and Alec in this type of AU setting because I can easily imagine Magnus as a dancer since he's naturally graceful, and the actor who portrays him, Harry Shum Jr, is also a professional dancer. Imagining Alec doing ballet and jazz is a very pleasant thought. If you're in the mood for a story that is full of fluff with a nice dose of angst, Hairpin Curve is for you!

Blog Tour: Out of the Ocean by Lynn Michaels

Cal Bigsby spent his life working the fishing boats and ignoring who he really is and what he needs to be happy.

Prescott ‘Scott’ Vandenburton is being primed to take over Daddy’s company, but he craves a life of his own. His only escape is sailing his yacht.

When a freak storm hits, both are forced to think about life from a whole new perspective.

Shipwrecked, fighting for their lives, and finding unexpected love.

Blog Tour: Would It Be Okay to Love You? Box Set by Amy Tasukada

Sato doesn’t get out much. The anime company accountant spends his days at a desk and his nights working on his own small-scale robots. His geeky life is like a dream, but it has just one piece missing…

The world only knows outgoing playboy Aoi for his moans. The budding voice actor has sworn off relationships since they’ll only distract him from his budding voice acting career. That was until he met Sato.

As Aoi’s popularity rises and secrets about his past begin to reveal themselves, can the accountant and the voice actor rise above their problems to create something real?

In a world where soulmates receive a completed mark when their special person speaks their name, Alec was resigned to being alone. Heartbreaking trauma caused him to become mute and he has not spoken a single word in 10 years. When a gorgeous and kindhearted man stumbles into his coffee shop and life, Alec wonders if Magnus could be the one.

I always find soulmate AUs to be really sweet and this story is no exception. The added obstable of Alec's muteness adds an interesting element of suspense and tension that I liked. The relationship between Magnus and Alec is so incredibly adorable that you will fall in love with this couple many times over. Be sure to give this story a try! It's so worth it!

Hate Before Love by Malec_lightwood_bane 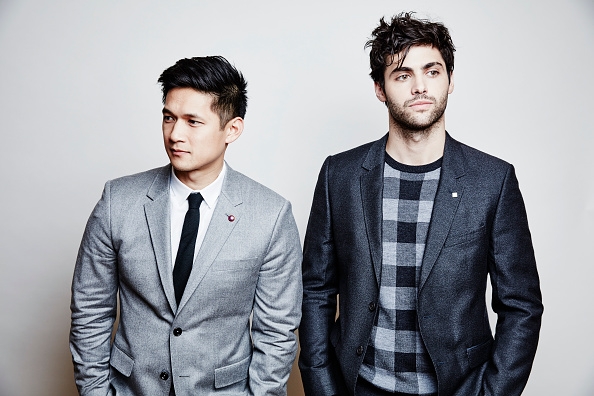 Hate Before Love by Malec_lightwood_bane

Magnus and Alec are two prominent and talented chefs in New York City. One would expect them to have a healthy rivalry since they work in the same industry, but they're actually enemies and have been for a decade. No one really knows why, but they've hated each other for so long that they know no other way. When a mutual friend brings them together, Alec and Magnus must come to terms with their new feelings and how this change will affect their lives going forward.

Enemies to lovers stories are always fun to read and this is no exception. Magnus and Alec are so snarky to each other that you can't help but laugh, but there's also an underlying attraction that makes you want to scream out, "just kiss already!" lol There are some interesting twists and turns that will keep you on the edge of your seat, but there are also some truly sweet and tender moments that will warm your heart. Give this story a try!

Book Review: Promise Me We'll Be Okay by Nell Iris

What do you do when your past comes knocking?

Six hundred and ninety-five days. That's how long it's been since Jude's fiancé broke off their engagement. With the help of his brother and his all-encompassing love for music, Jude glued the broken pieces of his heart back together, but when his ex shows up on his doorstep late one evening, Jude fears it will fall apart again.

Two years ago, Vincent made a terrible mistake. He left the love of his life for stupid, ill-advised reasons. It took a traumatic event to bring what was truly important in his life into focus. Older and wiser, he's now ready to do whatever it takes to win Jude back.

Their chemistry is as explosive as ever, but will they be able to work through the real issues? Can trust once broken be rebuilt?

This is a sweet, pretty uncomplicated read. All of the characters are likable and I enjoyed watching this small slice of their lives. Although I was happy with the overall direction Jude and Vincent's relationship took, it felt like it wrapped up a little too neatly and easily. To be honest, I expected more of a fight, but all in all, it was a pleasant second-chance-at-love story. The side character, Benji, really stole the show and I would love to see him get his own book one day.

Blurb
Micah Lennox left Whisper Ridge after promising the man he loved that he would never return. But the only way he knows to keep his pregnant sister and nephew safe is to go home. Spending winter in Wyoming opens too many old wounds, but he's on the run from justice which can't be far behind, and this is his last chance at redemption.

After a hostage situation leaves Doctor Daniel Sheridan struggling with PTSD, he returns to Whisper Ridge. Joining his dad in family practice is a balm to soothe his exhausted soul, and somehow, he finds a peace he can live with. That is until he meets Micah in a frozen graveyard, and the years of anger and feelings of betrayal boiling inside him, erupt.

Two broken men fight and scratch for their lives and that of their families, and somehow, in the middle of it all, they find each other.

Is it possible that love can be rekindled and become a forever to believe in?