Book Review: What Binds Us by Larry Benjamin 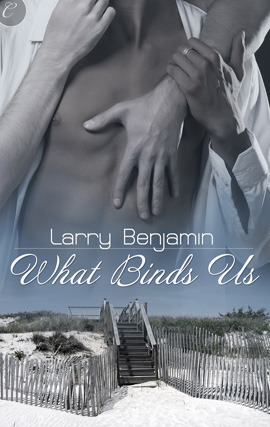 Wow! That's really the only word that can truly express my feelings towards this book.

It's 1977 and Thomas-Edward is starting his freshman year at Penn State. His roommate, Donovan "Dondi" Whyte, immediately captivates him. Dondi is charming, witty, and extremely magnetizing, and Thomas-Edward easily falls under his spell. As their friendship grows, they become lovers. Thomas-Edward is in love, but Dondi tells him he can never be what he wants. That free-spirited nature breaks Thomas-Edward's heart over and over again until he meets Dondi's younger brother, Matthew. They share a connection and bond like none other, and Thomas-Edward eventually realizes that, while he loves Dondi, Matthew is the man who holds his heart. When unforeseen tragedy strikes, the three men come together as a means of support and solace.

Larry Benjamin has crafted a beautiful tale of love, loss, discovery, redemption, concession and revelation. All of the characters are well-developed. I particularly appreciated the fact that the book's pace moved pretty quickly and was not weighed down by an overabundance of flowery language and set up. It felt as though I was sitting in the room with the characters and merely observing their lives.

There is one quote from the book that particularly struck a chord with me and can be applied to all of our lives.


"It's taken me my whole life to understand that the only thing between birth and death is love, that love is life."


What a happier world we'd live in if more people understood this powerful lesson!

Buy What Binds Us  here and here. 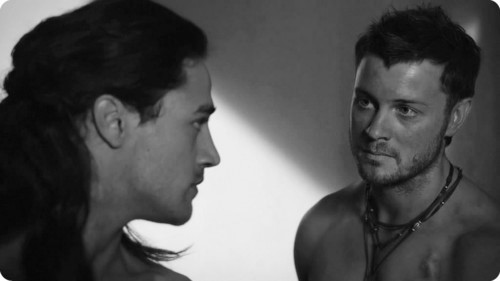 Due to life's responsibilities and differing work schedules, Agron and Nasir's relationship has been neglected. They are more like roommates than lovers and have not had sex in two months. When Agron returns home from yet another draining shift at the fire station, Nasir wants nothing more than to be in his man's arms. Will Agron and Nasir rekindle the spark that has been extinguished, not through any fault of their own, but because of jobs and life in general?

This is a lovely one shot that shows just how deeply Agron and Nasir love each other. It has a great mix of angst, tension, romance and heat. Be sure to check out the entire "Fire Starter" series! You won't be disappointed! Hello yaoi lovers! I hope you all are doing well! This week I'm excited to recommend an adorable and delightful manga, Honto Yajuu by Yamamoto Kotetsuko.

Ueda Tomoharu is a cop manning a local koban station. He’s quite happy with his job and relatively quiet life until he happens to run into Yakuza member, Gotouda Aki, while chasing down a thief...and is suddenly confessed to! Aki doesn’t seem bothered in the least about their star-crossed lovers status and eagerly dives into a super lovey-dovey relationship with his policeman, but Ueda’s about to find out just how dangerous it can be dating a mobster, in more ways than one.


I absolutely loved  this manga. There really isn't and over-arching plotline, but I enjoyed the various adventures of Ueda and Aki as they navigate their relationship. Even though Aki can be a little punk at times, he really does have a soft side when it comes to Ueda. I could really sense how much they love one another and it warmed my heart. If you're looking for a relatively uncomplicated manga that will bring a smile to your face, Honto Yajuu is definitely the one for you! When Agron stumbles upon a vulnerable, abandoned baby, he cannot leave him behind. He has the overwhelming urge to protect the baby, even though his fellow rebels view the child as a liability and hindrance. Will Agron convince the rebels, and Nasir, that the child deserves to live and thrive?

It's rare that I read a story in which Agron has such an extreme paternal moment. Usually Nasir broaches the topic of children, but Child Beloved of New Hearts  is a refreshing change, and I really liked Agron's determination and almost immediate emotional connection to the baby. I just want to let you all know that I'm taking a break this week from posting just to relax and refresh. As always, I'm constantly reading so that I can bring you the best fanfiction, m/m romance and yaoi recommendations. I'll be back, bright-eyed and bushy tailed, on Monday, August 25th.

When Aaron Quinn is forced to give himself to gangster Liam Sandoval for the weekend in order to pay off his father's debt, he never expected to find a warm, kindhearted and loving man under the tough mafia exterior. Being with Aaron is everything Liam has dreamed of since he was thrust into organized crime as a teenager. The selfish part of him wants to hold on to Aaron forever and build a life with him, but the logical part knows that this is no life for someone as innocent and sweet as Aaron. It's dangerous, scary and ugly. However, neither Aaron nor Liam can let go.

I really enjoyed this book! A.R. Hawkins wrote a compelling book about two of my favorite subjects: m/m romance and the mafia! I loved how Liam could be the cold, calculating member of a terrifying mafia organization, but also show a lot of tenderness and love toward those he cares about.

One of my favorite characters is Liam's close friend, colleague and confidant, Tristan. In my opinion, he was the epitome of bad ass. He did what was needed to be done without a second thought, often taking on tasks that Liam's conscious wouldn't allow him to carry out. Like Liam, Tristan had a softer side, which only added to my appreciation of him.

Some reviews I've read mentioned that they didn't like how the mafia aspect of this story was portrayed. As someone who has been fascinated by this topic for many years and has read numerous nonfiction books on the subject, I feel that the way the mafiosi, particularly Liam, were portrayed was fine. Not all men in organized crime are thoughtless, unfeeling bastards (a lot of them are, but not all). When it comes to family, they can be extremely loving, but also excruciatingly protective. To me, this is a book about a relationship between two men, one of whom just happens to be in the mafia. It's not a book about organized crime with a romance thrown in. I would encourage readers to focus on the relationships more than the lifestyle or jobs the characters have.

The Will of the Gods by herlovewasajoke

The Will of the Gods by herlovewasajoke

Agron is captured by the Romans and is scheduled to be executed in the arena. Nasir will stop at nothing to get his man back.

I really enjoyed this story. Nasir is the ultimate warrior, out for blood and the safe return of the man he loves. You will swell with pride as you watch Nasir use all of this skills, both mentally and physically, to achieve his goal. Highly recommended.

While fighting the biting cold during the snow storm, Agron and Nasir create their own heat.

Wow! In less than 900 words, SubtextEquals was able to create enough heat and electricity between Nasir and Agron to provide warmth for all the rebels...and a few Romans. Even packed tightly together under a makeshift tent, our boys did what they had to do to not only prevent themselves from freezing to death, but also re-solidify their relationship. Hot!

The Whim of a Dominus by ClauFeltonBlack‏

The Whim of a Dominus by ClauFeltonBlack‏

When an important guest of arrives at the door of Quintus and Lucretia Batiatus, the dominus hands over one of his best gladiators to the man and his body slave for a few hours of entertainment.

I really enjoyed this alternative look at how Agron and Nasir met. They still didn't meet under the best of circumstances, but the chemistry and fire between the two men is stronger than ever. Check out this great one shot! I know you won't be disappointed! 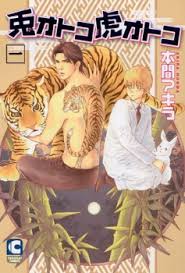 Dr. Uzuki, who works at a university teaching hospital, comes across in an alley and saves the Yakuza member Nonami after he's been shot. The next day, when Nonami shows up at the hospital, Uzuki is scared that he's come to make sure of his silence after he's seen the gunshot wound. But actually, Nonami, who misheard Uzuki's name and has mistaken him for a woman named "Suzuki", has forced a younger yakuza brother into being admitted into the hospital and order to find this woman, and they've started to search for this 'Suzuki'...

The timid rabbit-type doctor and the Yakuza with the chisled strength of a tiger - a law of the jungle love!*

This is an interesting story. I like the whole opposites attract theme and can't wait to see how Uzuki's and Nonami's relationship progresses. I have to admit, Nonami is pretty scary and sometimes downright mean, but I guess that's par for the course when it comes to Yakuza members, especially one ranked as high as Nonami. The second couple featured in this book is absolutely adorable! Even with the 16-year age difference, I really rooted for this couple and thought their interactions were silly, sweet and endearing.

Crayons and Craft Paste by herlovewasajoke Crayons and Craft Paste by herlovewasajoke

Nasir enjoys his job as a kindergarten teacher, but an additional perk of the job is his student's hot uncle, Agron. When the two of them hit it off, Nasir wonders if Agron, who is overwhelming, brash and extremely sexy, is too good to be true.

Stories like this always bring a smile to my face and are quickly becoming my favorite trope after college fics. The relationship between Agron and Nasir is absolutely adorable and it's always a pleasure to see Duro happy and healthy. Definitely give this delightful story a try!