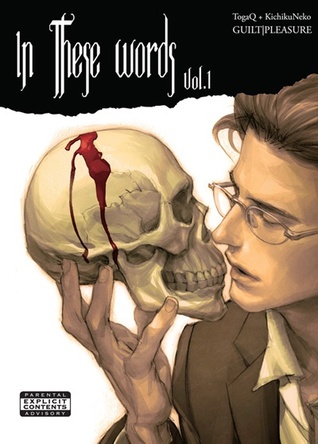 A couple of years ago, I attended a comic book convention with a cosplayer friend of mine. As we walked through Artist Alley, my friend excitedly told me that she wanted to see Jo Chen because she really admired her art over the years. As she explained all of the various projects Jo had worked on, we approached the table and I saw a petite woman working almost feverishly on a large piece of artwork. What blew me away were the incredible prints she had available for purchase. Everything from Buffy the Vampire Slayer, Superman, The Runaways and much more were on display, and I was in sensory overload. Her drawings are beautiful!

Once we were right in front of her table, Jo looked up, smiled and greeted us. My friend then started to speak to Jo about things I had no clue about (I'm not a big comic book fan, but I do read things here and there) while I continued to peruse her extensive collection of prints. At some point in the conversation, Jo mentioned yaoi. Now, at that point I was in the honeymoon stage of my slash infatuation. I knew what yaoi was, my friend even mentioned that Jo created yaoi art, but I still hadn't picked up a manga at that point. When I expressed my interest in it, Jo then pulled out a separate book and showed us some of her yaoi drawings, which were just as rich and beautiful and her more mainstream projects. I couldn't help but laugh when she mentioned that she sort of keeps that on the down low since it's not mainstream. She certainly isn't secretive about it, but some people just cannot wrap their heads around the genre.

After spending close to 20 minutes chatting with Jo and purchasing a couple prints (my friend purchased an awesome Superman drawing while I fell in love with a drawing from The Runaways series - unfortunately there were no yaoi prints available), we said our goodbyes. It was a great experience and I'm grateful that my friend introduced me to to her work.

Fast forward to earlier this month and I finally decided to look into Jo Chen's yaoi work and see if I could find a new manga to read. Well, I came across In These Words. It's nothing like the other yaoi manga I've read over the past year or so. There is no fluffy romance. There are no hearts and bunnies and sweet nothings whispered into the ears of ukes. This series is very dark and very graphic, but I loved every moment!


Asano Katsuya is a US trained psychiatrist who has been recruited by the Tokyo Police Department to provide a profile through the victims' data. Based on Asano's profile and recommendation, an elaborate plan is put into place to lure the serial killer out - a plan that bore successful results Now, after three years and twelve victims, Shinohara Keiji is finally in police custody. Shinohara has promised a thorough confession, however, on the absolute terms that Asano has to be the one to receive it. Besides the curious request by the killer whom Asano was only familiar with on paper, disturbing nightmares begin to plague him as soon as he's given the case...

Wow! Even though I read the summary prior to purchasing this manga, I did not expect the suspense, terror, confusion and intrigue I experienced. The relationship (if you can call it that) between psychiatrist, Asano Katsuya, and his serial killer patient, Shinohara Keiji, is reminiscent of Hannibal Lecter and Clarice Starling from The Silence of the Lambs. They have a rapport, but also like to play cat and mouse, trying to one up each other intellectually. I have to warn potential readers that this manga is graphic both in violence and sex. Nothing is hidden from view. However, I was completely drawn into these characters and the universe KichikuNeko and TogaQ (Jo Chen's yaoi pseudonym) created.

Volume one includes chapters one through five of the series. You can individually purchase chapters of the series, as well as volume two of In These Words on KichikiNeko and TogaQ's website Guilt Pleasure.

I highly recommend this awesome series!