A while back I discovered manga (Japanese comics) through a friend of mine. One of the first mangas I read was Fruits Basket and I thought the characters and storyline were interesting and fun (Momiji has to be one of the best manga characters ever!). Fast forward and I discovered something even better....yaoi manga!!!!! Yaoi (or BL - boys' love) manga is basically m/m comic books/graphic novels. Over the past year or so, I've read many yaoi mangas and novels, and I've enjoyed most of them. Occasionally I'll come across a manga that makes me slightly uncomfortable due to the dub-con and non-con situations, but I try my best to avoid them. 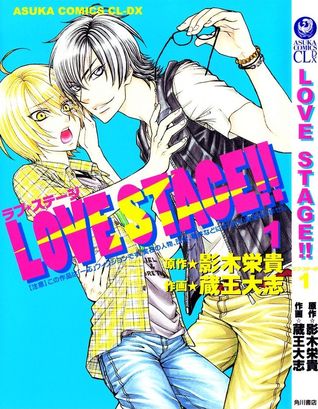 So going forward, I'm going to feature some of my favorite yaoi so far.

First up is Love Stage!! by Eiki Eiki


With a father who’s a singer, a mother who’s a movie star, and an older brother Shougo who’s the lead vocalist for the super-popular band ‘The Crusherz’, Sena Izumi–an otaku college student–is the only dull one born into this super famous and talented family. He loves “Magical Girl LalaLulu” and is working hard to become a mangaka, but one day he winds up appearing in a TV commercial he just can’t turn down. There, he’s reunited with Ichijou Ryouma, the super-popular young actor he costarred with on a project ten years prior.

Love Stage!! is a good manga for someone starting out in yaoi. There is romance, humor and a little heat mixed in. Sena Izumi is so adorable that you can't help but fall in love with him. He's spoiled and a little immature, but I can respect his drive to make a name for himself as a mangaka away from his famous family members. Ichijou Ryouma, Izumi's love interest, doesn't quite understand why he's so attracted to the obviously male Izumi, but the development of his feelings is interesting to see. Izumi's older brother, Shougo, and manager, Segara Rei, are hilarious secondary characters who have a love story of their very own.

Love Stage!! is still a WIP, but with each chapter and volume that's released, I somehow manage to love it more and more. An anime based on the manga will be released in July 2014 and I cannot wait to see it when it finally comes Stateside.