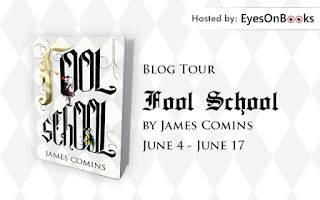 In the year of our Lord 1040, fourteen-year-old aspiring jester Tom is en route to Bath to begin his studies in the art of being a Fool, following in the footsteps of his father, and his father before him.

Along the way he meets Malcolm, a fire-haired boy with eyes green as forest glass. A Scotsman who's escaped from the ravages of the usurper Macbeth, Malcolm elects to join Tom at school.

Though the journey to Bath is hazardous, it pales in comparison to what they face at the austere and vicious Fool School, where all is not as it seems. A court jester must aim to be the lowest rung on the ladder of life, and the headmaster will not abide pride.

As they journey through life?s hardships together, Tom and Malcolm find they only have each other to depend upon.

Don't miss the 30% discount of the Mammoth May Sale on Wayward Ink Publishing's website!

Fool School Excerpt
It’s strangely gratifying when one of your audience finds joy, actual joy, in the music you make. Reassuring. The ealdorman conducts with his fat fingers, a genuine stupid smile on his lips.
There’s danger, too, in overplaying to the one man in the audience who’s happy with your performance. I overplay to this man.
“Enough,” sighs the ealdorman’s wife before long, and my tune dies away. I feel a pit of danger inside my chest. A warning. I see that the ealdorman himself is not the most powerful person in the room.
“But... eh... darling,” he murmurs, “don’t you think... couldn’t we... he’s but a boy-”
“Enough,” she repeats.
“Madame,” I find myself saying, “how may I entertain you?”
The room fills with a terrifying void, borne from her cold Welsh blood. A mist of icicles forms over the longtable draped by the red tablecloth, and people find their hands halfway to their mouths, food raised but uneaten. I fear for my life. I will be hanged now, taken to a gallowbraid and thrown off the side of the platform by this dark-eyed woman and her timid, complying husband. I will be kept in the wine cellar until dawn, swatting drunken mice, and in that moist-eyed fresh breath of day I will see the whole of creation pass before me as I take fugue steps up from the damp to the sunlight and the dew of summer’s toil, my feet drawn by the woman’s harsh words toward a fate of breathless... and... but here the ealdorman’s wife is speaking to me.
“Play a love song,” she whispers, and this is somehow worse than being executed on the gallows.
I don’t understand love. I say so. She dismisses it.
“Madame,” I repeat, “I’ll play for you, but I know nothing of love.”
“Yes,” her lips say, “that’s what I want to hear again.”
I’m frightened of her passion.
There is an old song, some say it comes from Master Boethius himself, that speaks of the devotion that the constant Penelope felt toward her husband, the warrior errant, Odysseus. It speaks of long years alone, sequestered in a house surrounded by enemy lovers like flies buzzing. They’re trying to convince her that her husband is not coming back, that she is alone, but she is strong, a fire buffeted by the wind, and she maintains, year after solitary year, tending her flame.
I cannot sing it-there’s a thousand thousand verses, well, not really, maybe five, but they’re long. However, the melody is familiar. I can play it on the recorder.
There is a very different world inside your head and in the shape of your mouth, playing a love song.
It begins in the first note.

JAMES COMINS is incapable of writing about himself in the third person. His future autobiography will probably be titled, "The Man Who Groaned His Way Toward Death." He writes stories for children and adults.

Born down the street from Stephen King, he now divides his time between Denver and Seattle.