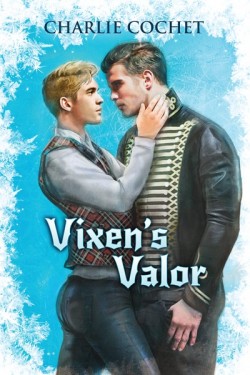 As one of the famed Rein Dear who help Mayor Kringle deliver joy to children on Christmas Eve, Vixen has quite a reputation...but not the reputation one would expect. He's known to being quite the flirt and has broken more than a few hearts in his time. His best friend and fellow Rein Dear, Rudy, wishes Vixen would slow down and possibly find someone special. That's all fine and good for Rudy who is not only is Captain, but also won the heart of the Jack, the Prince of Frost.

Even though Vixen loves Rudy like a brother, he is also very jealous of his status and boyfriend. Vixen believes he deserves a prince as well. When Jack's cousin, Vale, shows interest in Vixen, he casually accepts his affections. However, he runs the risk of missing what may be the greatest thing in his life.

The third book in North Pole City Tales series certainly lives up to other two books! It is filled with excitement, humor, tension and plenty of swoon-worthy moments. Vixen is feisty, silly and covetous, and Vale is romantic, sweet and all around wonderful! As always, it was nice to see glimpses of other characters from the series, particularly Rudy and Jack.

All in all, this is a sweet Christmas story that will have you holding your breath half of the time and swooning the other. Highly recommended!